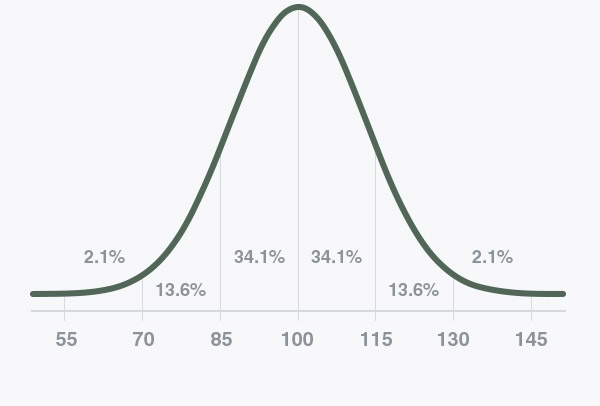 What Is an IQ?

This method of determining mental age doesn’t work too well when testing adults, and today, we attempt to write tests that will determine an person’s true mental potential, unbiased by culture, and compare their scores to the scores of others who have taken the same test.

To understand this concept, it can help to learn about what statisticians call normal distribution of data.

A normal distribution of data means that most of the examples in a set of data are close to the average, while relatively few examples tend to one extreme or the other.

Let’s say you are writing a story about nutrition. You need to look at people’s typical daily calorie consumption. Like most data, the numbers for people’s typical consumption probably will turn out to be normally distributed. That is, for most people, their consumption will be close to the mean, while fewer people eat a lot more or a lot less than the mean.

When you think about it, that’s just common sense. Not that many people are getting by on a single serving of kelp and rice. Or on eight meals of steak and milkshakes. Most people lie somewhere in between.

If you looked at normally distributed data on a graph, it would look something like this:

Now, not all sets of data will have graphs that look this perfect. Some will have relatively flat curves, others will be pretty steep. Sometimes the mean will lean a little bit to one side or the other. But all normally distributed data will have something like this same “bell curve” shape.

Why is this useful? Here’s an example: If you are comparing test scores for different schools, the standard deviation will tell you how diverse the test scores are for each school.

Let’s say School A has a higher mean test score than School B. Your first reaction might be to say that the kids at School A are smarter.

But a bigger standard deviation for one school tells you that there are relatively more kids at that school scoring toward one extreme or the other. By asking a few follow-up questions you might find that, say, School A’s mean was skewed up because the school district sends all of the gifted kids to School A. Or that School B’s scores were dragged down because students who recently have been “mainstreamed” from special education classes have all been sent to School B.

In this way, looking at the standard deviation can help point you in the right direction when asking why data is the way it is.

The standard deviation can also help you evaluate the worth of all those so-called “studies” that seem to be released to the press everyday. A large standard deviation in a study that claims to show a relationship between eating cupcakes and winning marathons, for example, might tip you off that the study’s claims aren’t all that trustworthy.

Here is one formula for computing the standard deviation.
A warning, this is for math geeks only! Those seeking only a basic understanding of stats don’t need to read any further. Remember, a decent calculator and stats program will calculate this for you.

The bell curve shown on the homepage illustrates a standard deviation of 15.

Most people have an intuitive notion of what intelligence is, and many words in the English language distinguish between different levels of intellectual skill: bright/dull, smart/stupid, clever/slow, and so on. Yet no universally accepted definition of intelligence exists, and people continue to debate what, exactly, it is. Fundamental questions remain: Is intelligence one general ability or several independent systems of abilities? Is intelligence a property of the brain, a characteristic of behavior, or a set of knowledge and skills?

Whenever scientists are asked to define intelligence in terms of what causes it or what it actually is, almost every scientist comes up with a different definition. For example, in 1921 an academic journal asked 14 prominent psychologists and educators to define intelligence. The journal received 14 different definitions, although many experts emphasized the ability to learn from experience and the ability to adapt to one’s environment. In 1986 researchers repeated the experiment by asking 25 experts for their definition of intelligence. The researchers received many different definitions: general adaptability to new problems in life; ability to engage in abstract thinking; adjustment to the environment; capacity for knowledge and knowledge possessed; general capacity for independence, originality, and productiveness in thinking; capacity to acquire capacity; apprehension of relevant relationships; ability to judge, to understand, and to reason; deduction of relationships; and innate, general cognitive ability.

People in the general population have somewhat different conceptions of intelligence than do most experts. Laypersons and the popular press tend to emphasize cleverness, common sense, practical problem solving ability, verbal ability, and interest in learning. In addition, many people think social competence is an important component of intelligence.

In recent years, a number of theorists have argued that standard intelligence tests measure only a portion of the human abilities that could be considered aspects of intelligence. Other scholars believe that such tests accurately measure intelligence and that the lack of agreement on a definition of intelligence does not invalidate its measurement. In their view, intelligence is much like many scientific concepts that are accurately measured well before scientists understand what the measurement actually means. Gravity, temperature, and radiation are all examples of concepts that were measured before they were understood.

Take the Test at IQTest.com now